David Hage wields his detuned guitar like a paintbrush on the end of a pickaxe. Impassioned vocals dare the listener to take a second or third look at the pile of rubble he has meanwhile turned into a laughing statue of a miner. Or is that a soldier or a slave? A native American landscape both sublime and decaying, but a place you most definitely want to go. At the end of the day, these are love songs. Let them in.

Hailing from the culturally–diverse and economically–depressed anthracite coal mining region of Northeastern Pennsylvania, David Hage performs under the epithet Coal Minor Canary. The name references the canaries that were used in area anthracite coal mines to warn miners of deadly gasses so they could evacuate as a metaphor to passionately share his songs with listeners. His style merges a combination of travis picking borrowed from regional folk music with progressive fingerstyle guitar, alternate tunings, and percussive techniques paired with ethereal effects and looping.

Coal Minor Canary is the epithet used by Northeastern Pennsylvania-based musician, David Hage. The name borrows reference to canaries used well into the 20th-century as an early-warning signal to coal miners so that they could escape the mines before carbon monoxide, or methane gasses reached lethal levels. Hage metaphorically uses the name Coal Minor Canary to convey nuances of experiences that are not adequately detectable through any other means other than the immediacy, sincerity, and intensity of his music. Coal Minor Canary’s musical style is uniquely his own; mixing travis picking borrowed from regional folk music with progressive fingerstyle guitar, and percussive techniques accented by layers of ethereal effects and looping. His lyrical exploration is personal and passionate and often paired with rich alternate tunings and sparse melodic arrangements that define his dusty black diamond music.

Hage’s grandfather who was a jazz drummer and music teacher, and he was raised in an environment with parents, and other family members were musically inclined. He is a Ph.D. student in gerontology and views helping others much like the process of writing a song and employs similar passion and creativity in both arenas. After having experienced a relationship coming to an end, coupled with the cumulative effects of taking a break from his creativity; he had no choice but to write his debut EP, 342.

3:42 is Coal Minor Canary’s (2017) six song EP release ranging from delicate fingerstyle guitar work to energetic ballads orchestrated with rich layers of cello accompaniment. The title track, “3:42” takes the listener on a journey through recollections of the delicate acknowledgment of beauty and love balanced with hope vs. doubt. The beehive and bees on the cover aptly illustrate relational experiences, ranging from the sweetness of honey (a metaphor for love) to the stings a bee may leave; similar to the pain that love’s absence brings in the process of tasting its sweetness.

“Coal Minor Canary“ (David Hage) combines elements of catchy fingerpicking and altered tunings, which pull the listener’s ears into fresh and exciting new territory. He is a must see act for any real music fan. One can clearly tell, David is drawing his inspiration from a genuine place and is playing music that is honest and real.”
–MiZ (Mike Mizwinski, Tri-State Indie “Acoustic Artist” of the Year)

“Northeastern Pennsylvania musician David Hage chose the moniker Coal Minor Canary as his performing name, a title that hearkens to the bleak but important economic and cultural history of the region. The name also holds a bit of mystery, which is fitting for Hage, a progressive fingerstyle guitarist whose songs, which you can hear on his recently released debut EP, “3:42,” are intriguing and difficult to pin down.”
Highway 81 Revisited 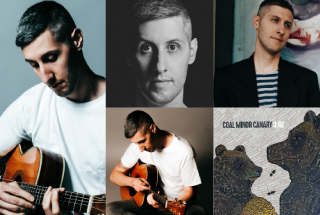